SKU
VVFM
£54.50
Type
Skip to the end of the images gallery 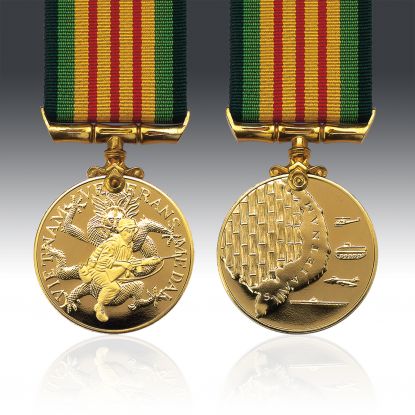 A soldier crouching with a symbolic dragon of Vietnam behind is featured with the words: ‘Vietnam Veterans Medal’.

A map of Vietnam, symbolic bamboo and the various transports used by the allied forces representing land, sea and air forces are featured on the reverse of the medal.

The woven ribbon comprises dark and light green borders representing the Green of Vietnam while the yellow and red colours of the Republic of Vietnam are centralised between the green borders. This medal is supplied on a concealed single pin, ready to wear.

A commemorative medal paying tribute to all those who served in Vietnam between 1960 and 1972.

The Vietnam Veterans Commemorative medal is available to all who served in Vietnam between 1960 and 1972. Next of kin and direct descendants can also apply.