AWARD, in association with SSAFA - the Armed Forces charity, is proud to announce the striking of the Commemorative World War II Victory & Peace Medal. 2020 marks the 75th anniversary of victory and final settlement of peace in Europe, the Far East and Pacific war zones after much sacrifice and loss of life over a total six-year period of war.
SKU
VPMM
£17.50
Skip to the end of the images gallery 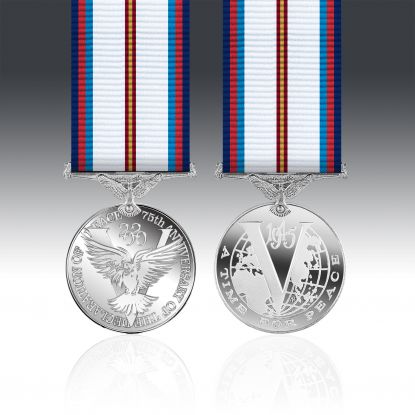 The obverse of the medal, with all its fine detail frosted on a mirror polished background, has the dove of peace rising in flight from the letter ‘V’ for victory and the date 2020, carrying in its beak a palm branch which is the symbol of victory and peace. Surrounding the design is the wording 75th ANNIVERSARY OF THE DECLARATION OF PEACE.

The medal reverse features the iconic design of the Restoration of Peace Medal issued to mark the 50th Anniversary and has the world globe as its centre. The globe is domed and depicts the African, European and Pacific landmasses with the letter ‘V’ for victory and the date 1945. Surrounding the globe are the words A TIME FOR PEACE. The Ribbon & Suspender Bar

The outer bands of red and blue represent the services, Merchant Navy and the involvement of SSAFA whilst the two diamond white bands reflect the 75th anniversary of victory and peace. The theme of the Restoration of Peace Medal is continued with the two centre bands of rich claret representing life separated by a band of gold for the dawn of a new day. The ribbon is fitted to the same suspender with its unusual feature of the dove of peace rising in flight and carrying in its beak a palm branch. The medal is supplied on a concealed single pin, ready to wear with pride, not alongside campaign medals or gallantry decorations, but separately and distinctively.

>
Eligibility
The miniature medal and all other items are available without restrictions.
Testimonials
Customer feedback
“Once again I can’t but give you the highest of praise for your truly super customer service response ,in this day and age its really nice to find such treatment from a large company”
Customer: W Lay
“I have received my Grandad's medals back and would like to thank you for the outstanding job that has been made.”
Customer: C Hardy
“Received package today. We are delighted with the finished product, it has way exceeded our expectations. We will not hesitate to use your services again.”
Customer: S Scott
“I just received my order. Not only did it arrive in time, the product is beautiful and beyond my expectations.”
Customer: R Magee
“Thank you very very much for the great fantastic work you did on the Medal Sets you sent to me. They are a great tribute to my fathers memory and service.”
Customer: D Hancock
01952 510 053
Speak to our expert customer service team Mon-Fri 9am to 5pm.