The Victoria Cross (VC) is the highest military decoration which is awarded for valour 'in the face of the enemy' to members of the armed forces of various Commonwealth countries, and previous British Empire territories. 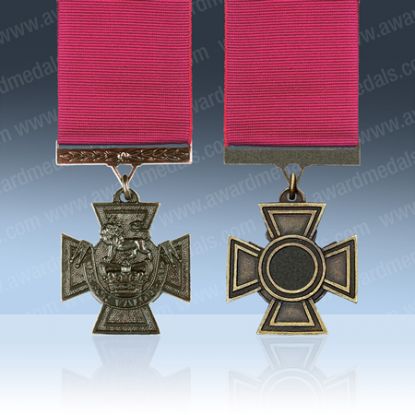 The VC was introduced on 29 January 1856 by Queen Victoria to reward acts of valour during the Crimean War. Since then, the medal has been awarded 1,356 times to 1,353 individual recipients. Only 13 medals, nine to members of the British Army, and four to the Australian Army have been awarded since the Second World War.

This die-struck, museum quality replica medal is struck to the same exacting standards as the original medal.

Medal Mounting
This medal is supplied with a loose ribbons as it would have originally have been awarded. If you would like this medal mounted on a bar either on its own or group mounted with other medals purchased. Commemorative & Official Medals CANNOT be group mounted together.