A commemorative medal to pay tribute and honour the memory of all TA soldiers who served the nation.

SKU
TAFM
£54.50
Type
Skip to the end of the images gallery 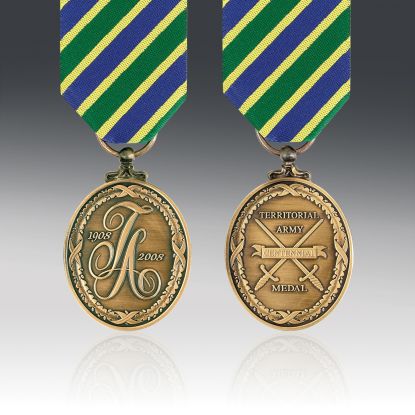 The obverse of this very distinctive antique bronzed oval medal proudly depicts the monogram TA with the year dates 1908-2008 in an oak wreath.

The reverse of the medal features the Army crossed swords symbol and the inscription: ‘Territorial Army Centennial Medal’ in an oak wreath.

The medal ribbon is fitted to a ring suspension with its diagonal green and yellow stripes representing the TA and the blue stripe the period 1967-1979 when the TAVR (Territorial Army and Volunteer Reserve) units were formed. This medal is supplied on a concealed single pin, ready to wear.

From the Territorial Forces’ mobilisation for the First World War through the Second World War, Korean War, Suez Crisis, Northern Ireland to the more recent operations of today in Iraq and Afghanistan, TA soldiers have been serving side by side with their Regular Army comrades.

The Commemorative Territorial Army Centennial Medal was struck in 2008 to mark the 100th anniversary of its formation and is a befitting way to pay tribute and honour the memory of all TA soldiers who served and are serving the nation at home and overseas.

Eligibility
The full-size medal is available to all those who served in the TA or TAVR, their next of kin or direct descendants. The medal is fitted with a uniquely woven ribbon, completed with a concealed individual brooch bar, ready to wear with pride, not alongside campaign medals, gallantry decorations or in uniform by serving members but separately and distinctively.
Testimonials
Customer feedback
“Once again I can’t but give you the highest of praise for your truly super customer service response ,in this day and age its really nice to find such treatment from a large company”
Customer: W Lay
“I have received my Grandad's medals back and would like to thank you for the outstanding job that has been made.”
Customer: C Hardy
“Received package today. We are delighted with the finished product, it has way exceeded our expectations. We will not hesitate to use your services again.”
Customer: S Scott
“I just received my order. Not only did it arrive in time, the product is beautiful and beyond my expectations.”
Customer: R Magee
“Thank you very very much for the great fantastic work you did on the Medal Sets you sent to me. They are a great tribute to my fathers memory and service.”
Customer: D Hancock
01952 510 053
Speak to our expert customer service team Mon-Fri 9am to 5pm.