SKU
SZMM
£17.50
Type
Skip to the end of the images gallery 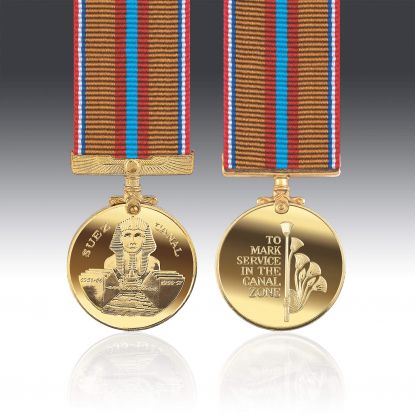 The obverse feature the Sphinx overlooking the waters of the canal and holding a chain between the outstretched legs, symbolising the blockade. On either side of the design are the words ‘Suez Canal’ with the dates 1951-54 and 1956-57, which represent the two most recent periods of unrest and conflict.

The reverse features the papyrus grass, otherwise called the paper plant. The glass-like aquatic, cultivated in the Nile region of Egypt, was harvested for its properties, which were pressed and dried to form a smooth, thin writing surface. To the left of the flower are the words: ‘To mark service in the Canal Zone.’

The narrow red, white and blue stripes on the edge of the ribbon represent the involvement of the British and French forces bordering the sand of the desert and in the centre the canal. The exclusively designed woven ribbon is fitted to a uniquely created medal suspender in the form of Pharaonic wings. This medal is supplied on a concealed single pin, ready to wear.