SKU
SZFM
£54.50
Type
Skip to the end of the images gallery 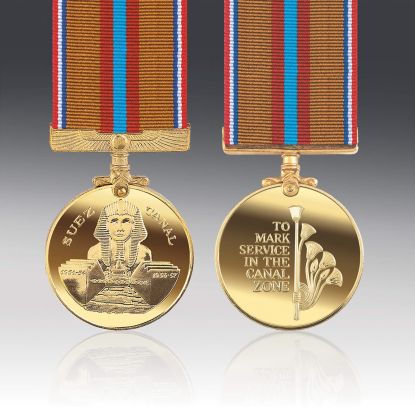 The obverse feature the Sphinx overlooking the waters of the canal and holding a chain between the outstretched legs, symbolising the blockade. On either side of the design are the words ‘Suez Canal’ with the dates 1951-54 and 1956-57, which represent the two most recent periods of unrest and conflict.

The reverse features the papyrus grass, otherwise called the paper plant. The glass-like aquatic, cultivated in the Nile region of Egypt, was harvested for its properties, which were pressed and dried to form a smooth, thin writing surface. To the left of the flower are the words: ‘To mark service in the Canal Zone.’

The narrow red, white and blue stripes on the edge of the ribbon represent the involvement of the British and French forces bordering the sand of the desert and in the centre the canal. The exclusively designed woven ribbon is fitted to a uniquely created medal suspender in the form of Pharaonic wings. This medal is supplied on a concealed single pin, ready to wear.

This commemorative medal marks the service of participants and support personnel in the Suez Canal Zone between 1945 and 1957.

The Suez Canal revolutionised the trade route from Europe to Asia, which is why it has been the focus of international interest for centuries. It has seen much conflict and been owned by many rulers and kings but only now that trade depends so heavily on it, do all eyes fall on it to ensure it doesn’t run into disrepair or another crisis.

Although British troops had been in the canal zone since 1945, one of the most recent and significant crises which involved British and French forces in the area came in 1951 when Egypt renounced its 1936 treaty with Britain and British troops took control of the canal. In 1954 Egypt and Britain signed an agreement, suspending the 1936 treaty that provided for the withdrawal of all troops.

In June 1956 Gamal Abdel Nasser was elected president of Egypt and he nationalised the Suez Canal resulting in what became known as The Suez Crisis, which saw Britain and France returning to the Canal Zone.

It is to mark such service that the Suez Canal Zone Medal was introduced.

Eligibility
The Suez Canal Zone Commemorative Medal is available to all veterans who served in the Canal Zone between 1945 until 1957, their next of kin or direct descendants. The medal is fitted with a uniquely woven ribbon, completed with a concealed individual brooch bar, ready to wear with pride, not alongside campaign medals, gallantry decorations or in uniform by serving members but separately and distinctively.
Testimonials
Customer feedback
“Once again I can’t but give you the highest of praise for your truly super customer service response ,in this day and age its really nice to find such treatment from a large company”
Customer: W Lay
“I have received my Grandad's medals back and would like to thank you for the outstanding job that has been made.”
Customer: C Hardy
“Received package today. We are delighted with the finished product, it has way exceeded our expectations. We will not hesitate to use your services again.”
Customer: S Scott
“I just received my order. Not only did it arrive in time, the product is beautiful and beyond my expectations.”
Customer: R Magee
“Thank you very very much for the great fantastic work you did on the Medal Sets you sent to me. They are a great tribute to my fathers memory and service.”
Customer: D Hancock
01952 510 053
Speak to our expert customer service team Mon-Fri 9am to 5pm.