Pip, Squeak and Wilfred - the nicknames of the three medals instituted at the end of the First World War, came about due to the popularity of the characters of a Daily Mirror newspaper strip, thought up by Bertram J Lamb, which first appeared in 1919. 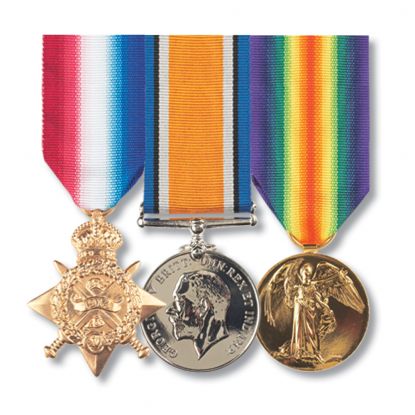 “Pip” a dog, “Squeak” a penguin and “Wilfred” a rabbit were inseparable. “Pip” was used to describe the 1914 and 1914-1915 Star, holders of one were not eligible for the other, “Squeak” was the name given to the British War Medal and to complete the trio the Victory Medal became “Wilfred”.

We understand that many of our customers will be looking to commemorate the centenary of the Great War with die-struck replicas of the original medals. For this reason, we have made it very easy for you to order individual medals, mounted groups or framed commemorations in either miniature or full-size. Please remember that, as with all our medals, Pip, Squeak & Wilfred replicas are museum quality, die struck in an MoD licensed facility in Birmingham using many of the same methods used to produce the originals. Each set purchased from Award will be accompanied with a certificate of authenticity.

“where one was the other two were sure to follow”