The Rhodesian Independence Medal was commissioned on behalf of the joint committee of Rhodesian Army, Rhodesian Air Force and British South Africa Police Associations to honour the contribution of each person who lived through the very trying times of Rhodesian independence between 1965 to 1979.

SKU
RIFM
£54.50
Type
Skip to the end of the images gallery 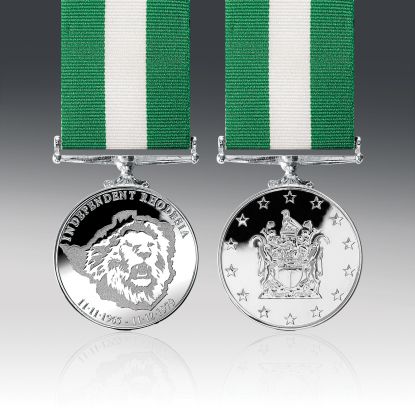 An outline of Rhodesia around a snarling lion is featured on a highly polished background, symbolising Rhodesian defiance encompassed by the words: ‘Independent Rhodesia’ and the dates 11.11.1965 – 11.12.1979.

The Rhodesian Coat of Arms surrounded by fourteen stars for 14 years of Rhodesian independence is featured on a highly polished background.

The medal is suspended from a brooch by a woven ribbon, comprising the green and white colours of the Rhodesian flag. This medal is supplied on a concealed single pin, ready to wear.

History
On 11 December 1979 Rhodesia ceased to exist as an independent nation yet the spirit of the people who called themselves Rhodesians lives on. Very trying times came to those living in Rhodesia between the declaration of independence on 11 November 1965 and the date when the British Government assumed control of the country for the first time in history under Lord Soames. In the face of apparently overwhelming adversity following UDI, Rhodesians fought to uphold their beliefs and an already Rhodesian spirit was lifted still higher, bringing about the unique determination that resulted in continued economic growth for the first 12 years of Rhodesian independence.
Eligibility
The Rhodesian Independence Commemorative Medal is available to all who lived in Rhodesia between 11.11.1965 and 11.12.1979 and remain proud to call themselves Rhodesians. Next of kin or direct descendants can also apply. The medal is fitted with a uniquely woven ribbon, completed with a concealed individual brooch bar, ready to wear with pride, not alongside campaign medals, gallantry decorations or in uniform by serving members but separately and distinctively.
Testimonials
Customer feedback
“Once again I can’t but give you the highest of praise for your truly super customer service response ,in this day and age its really nice to find such treatment from a large company”
Customer: W Lay
“I have received my Grandad's medals back and would like to thank you for the outstanding job that has been made.”
Customer: C Hardy
“Received package today. We are delighted with the finished product, it has way exceeded our expectations. We will not hesitate to use your services again.”
Customer: S Scott
“I just received my order. Not only did it arrive in time, the product is beautiful and beyond my expectations.”
Customer: R Magee
“Thank you very very much for the great fantastic work you did on the Medal Sets you sent to me. They are a great tribute to my fathers memory and service.”
Customer: D Hancock
01952 510 053
Speak to our expert customer service team Mon-Fri 9am to 5pm.