The Restoration of Peace Medal marks the essential effort of those who served in the fighting forces or war-effort workers throughout the Allied countries during the Second World War.

SKU
PAFM
£54.50
Type
Skip to the end of the images gallery 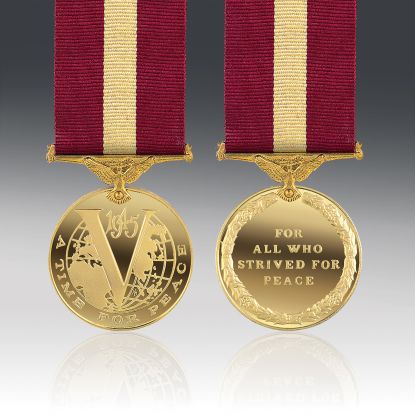 The Restoration of Peace medal features the world glove in its centre, detailed in a frosted finish on a mirror polished background.  The domed globe features the African, European and Pacific land masses, divided by ‘V’ for victory. Rising from the centre is the date 1945, to commemorate the year that peace was restored. Surrounding the globe are the words: ‘A Time for Peace’. This recalls Neville Chamberlain’s famous words in 1938: ‘I believe it is peace for our time’.

The reverse features a simple wreath on a brilliant polished background, surrounding the words: ‘For all who strived for Peace’. The warm golden appearance of the medal, adds prestige and to this commemorative’s significance; reflecting the exceptional resolve which brought about victory and restored peace.

The outer bands of rich claret represent life with the centre band of gold representing the dawn of a new day. The distinctive woven ribbon is fitted to a uniquely designed suspender which has the unusual feature of the dove of peace rising in flight and carrying in its beak a palm branch, which is the symbol of victory and peace above the dove. This medal is supplied on a concealed single pin, ready to wear.

At 2.40am on the morning of 7 May 1945 the German High Command surrendered at Rheims, north east of Paris, effectively ending the dreams of the Third Reich and introducing a state of peace to Europe. It was however, not until mid-August of that year before peace was to descend in the Far East and Pacific war zone with the surrender of the Japanese nation. These two historic events had long been consummate goals of the Allies but they were only achieved after much sacrifice and loss of life over a total six-year period. The ultimate victories were the achievements of the fighting forces with dedicated support of the essential war-effort workers throughout the Allied countries. To mark the final settlement of peace in Europe and the Pacific and Far East, this very special commemorative medal has been struck to acknowledge a truly allied effort which made these victories possible.

The Restoration of Peace Medal is available to all those who served between 1939 and 1945 in the fighting forces or essential war effort workers throughout the Allied countries or their next of kin and direct descendants.