The Queens Silver Jubilee Medal was distributed to each of the British Empire and Crown dependencies and possessions, and later Commonwealth of Nations countries. From that point, the award of the medals was at the discretion of the local government authority. Thus, for the Queen Elizabeth II Silver Jubilee Medal, which was created by a Royal Warrant from the Queen, 30,000 were distributed in Britain, 1,507 in New Zealand, 6,870 in Australia, and 30,000 in Canada. 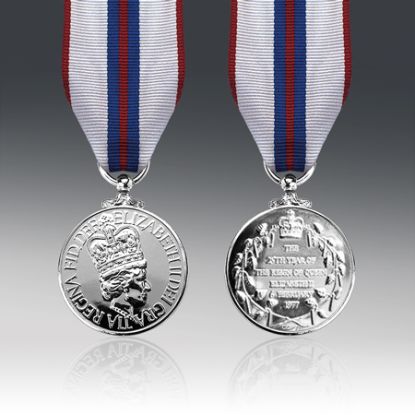 Please Note:
This is a REPLICA of the Queen's 1977 Silver Jubilee Medal and has the word 'COPY' discretely stamped above the dates on the reverse of the medal (illustrated) as is the requirement of the Medals Office.

Medal Mounting
This medal is supplied with loose ribbon as it would have originally have been awarded. If you would like this medal mounted on a bar (either on its own or group mounted with other medals purchased) please select from the options below (Full-size Commemorative & Official Medals CANNOT be group mounted together):

Please Note: This medal is not available with Medal Edge Engraving.

Eligibility
To be eligible to wear this medal you must have been serving in 1977 and in service 5 years prior. The set can be purchased for collection purposes only if you are not eligible, but should not be worn.
Testimonials
Customer feedback
“Once again I can’t but give you the highest of praise for your truly super customer service response ,in this day and age its really nice to find such treatment from a large company”
Customer: W Lay
“I have received my Grandad's medals back and would like to thank you for the outstanding job that has been made.”
Customer: C Hardy
“Received package today. We are delighted with the finished product, it has way exceeded our expectations. We will not hesitate to use your services again.”
Customer: S Scott
“I just received my order. Not only did it arrive in time, the product is beautiful and beyond my expectations.”
Customer: R Magee
“Thank you very very much for the great fantastic work you did on the Medal Sets you sent to me. They are a great tribute to my fathers memory and service.”
Customer: D Hancock
01952 510 053
Speak to our expert customer service team Mon-Fri 9am to 5pm.