AWARD is proud to announce the striking of the Commemorative Queen Elizabeth 65th Anniversary Coronation Medal . The Queen witnessed her father’s coronation in 1937 and this year marks 65 years since her own coronation on 2 June 1953; making it a particularly poignant and remarkable moment in royal history. This momentous day would officially mark the beginning of the longest reign in our history. There is not an official issue of this medal and so we are delighted to offer an exclusive opportunity to apply for the medal for those who have served or are currently serving Crown and Country.

SKU
CCFM
£54.50
Type
Skip to the end of the images gallery 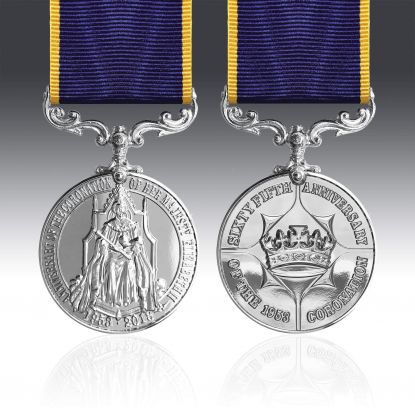 The obverse of the medal is highly polished and captures the majestic beauty of the queen invested with regalia and sat upon the Coronation Chair. Encircling the image is the wording: ANNIVERSARY OF THE CORONATION OF HER MAJESTY ELIZABETH II 1953 - 2018

The reverse medal design shows four quarters of the medal peeled away to reveal a crown at its very heart. Surrounding the design is the wording: SIXTY FIFTH ANNIVERSARY OF THE 1953 CORONATION.

The medal ribbon is woven in regal purple with a striking golden stripe down each outer edge. The medal is supplied on a concealed single pin, ready to wear.

AWARD is a proud supporter of Veteran Groups & Charities since 1986 and has donated over £1 million to date. We will be donating 10% from the net sale (£4.13 of each full-size and £1.38 of each miniature) of the Commemorative Queen Elizabeth 65th Anniversary Coronation Medal in support of SSAFA, the Armed Forces Charity. Registered as a charity in England and Wales, Number 210760 in Scotland Number SCO38056 and in Republic of Ireland Number 20006082. SSAFA, the Armed Forces charity provides lifelong support to our Armed Forces, veterans and their families. We began our work in 1885 and each year we help over 67,000 people – from World War Two veterans to those involved in more recent conflicts and their families.
History
AWARD is proud to announce the striking of the Commemorative Queen Elizabeth 65th Anniversary Coronation Medal . The Queen witnessed her father’s coronation in 1937 and this year marks 65 years since her own coronation on 2 June 1953; making it a particularly poignant and remarkable moment in royal history. This momentous day would officially mark the beginning of the longest reign in our history. The image of the medal shown is computer generated. The design, inspired by The Great Seal of the Realm, details the regal splendour of the coronation with the Queen at its centre and is complimented beautifully with a regal purple and golden ribbon fitted to an elegant medal suspender.
Eligibility
Available to all those who have served Queen and Country from 2nd June 1953, the date of the coronation of Queen Elizabeth II, and those who are currently serving members of the Armed Forces, Emergency Services personnel (paid, retained or voluntary), Prison Service, Police Community Support Officers, holders of the Victoria Cross and George Cross and members of the Royal Household. Next of kin and direct descendants may also apply. The miniature medal and all other items are available without restriction. The medal is fitted with a uniquely woven ribbon, completed with a concealed individual brooch bar, ready to wear with pride, not alongside campaign medals, gallantry decorations or in uniform by serving members but separately and distinctively.
Related Items
Check items to add to the cart or
Testimonials
Customer feedback
“Once again I can’t but give you the highest of praise for your truly super customer service response ,in this day and age its really nice to find such treatment from a large company”
Customer: W Lay
“I have received my Grandad's medals back and would like to thank you for the outstanding job that has been made.”
Customer: C Hardy
“Received package today. We are delighted with the finished product, it has way exceeded our expectations. We will not hesitate to use your services again.”
Customer: S Scott
“I just received my order. Not only did it arrive in time, the product is beautiful and beyond my expectations.”
Customer: R Magee
“Thank you very very much for the great fantastic work you did on the Medal Sets you sent to me. They are a great tribute to my fathers memory and service.”
Customer: D Hancock
01952 510 053
Speak to our expert customer service team Mon-Fri 9am to 5pm.