SKU
NVMM
£17.50
Type
Skip to the end of the images gallery 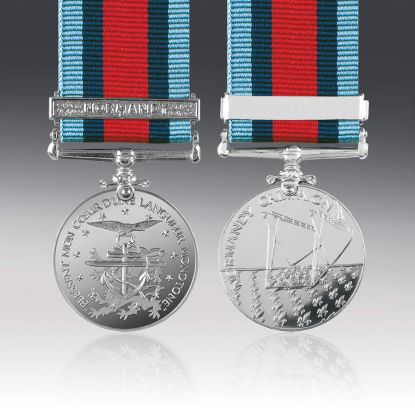 The combined services operation is symbolised by the flying eagle of the Air Force, the fouled anchor of the Navy and the bayonet of the land forces. In the background are two lions guardant from the arms of Normandy. A ring of 13 stars feature, signifying the contribution of the American Forces, which also form part of the coat of arms of the US Army with code words from the verse of Verlaine, as broadcast by the BBC, signalling the commencement of the operation at 21.15 on 5 June 1944: Blessent on Coeur d’une langueur monotone (wound my heart with a monotonous languor).

A tank landing craft is depicted with its ramp on the beaches of France, symbolised by the fleurs-de-lis. The official dates of the campaign (6 June – 20 August 1944), appear on the extended ramp of the craft. The words – NORMANDY CAMPAIGN – proudly proclaim the message of the medal.

The ribbon comprises the red, dark blue and light blue colours of the 1939-45 Star, arranged in a significant sequence. The centre in flame red, represents the Army which was carried on the mission by the Navy; represented by two bands of deep navy blue. These bands are in turn bounded by bands of blue-grey, representing overall protection of the invasion by the Air Forces. This medal is supplied on a concealed single pin, ready to wear.