Next of kin or direct descendants may also apply.

SKU
NVFM
£54.50
Type
Skip to the end of the images gallery 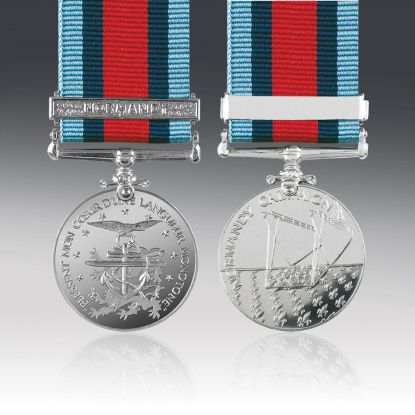 The combined services operation is symbolised by the flying eagle of the Air Force, the fouled anchor of the Navy and the bayonet of the land forces. In the background are two lions guardant from the arms of Normandy. A ring of 13 stars feature, signifying the contribution of the American Forces, which also form part of the coat of arms of the US Army with code words from the verse of Verlaine, as broadcast by the BBC, signalling the commencement of the operation at 21.15 on 5 June 1944: Blessent on Coeur d’une langueur monotone (wound my heart with a monotonous languor).

A tank landing craft is depicted with its ramp on the beaches of France, symbolised by the fleurs-de-lis. The official dates of the campaign (6 June – 20 August 1944), appear on the extended ramp of the craft. The words – NORMANDY CAMPAIGN – proudly proclaim the message of the medal.

The ribbon comprises the red, dark blue and light blue colours of the 1939-45 Star, arranged in a significant sequence. The centre in flame red, represents the Army which was carried on the mission by the Navy; represented by two bands of deep navy blue. These bands are in turn bounded by bands of blue-grey, representing overall protection of the invasion by the Air Forces. This medal is supplied on a concealed single pin, ready to wear.

“We all take great pride in being veterans of the Normandy Campaign, and being entitled to wear this special campaign medal.

This will always remind us of those anxious and exciting days, when we each had some part to play in that great adventure – the largest amphibious operation in history – which helped to free the world from tyranny and fear.

We will never forget our comrades who were wounded or who lost their lives. Our memories of the experience which shared then will bind us together for ever.”

Eligibility
The Normandy Campaign Medal is available exclusively to veterans of the Normandy Campaign between 6 June and 20 August 1944, their next of kin or direct descendants. The medal is fitted with a uniquely woven ribbon, completed with a concealed individual brooch bar, ready to wear with pride, not alongside campaign medals, gallantry decorations or in uniform by serving members but separately and distinctively.
Testimonials
Customer feedback
“Once again I can’t but give you the highest of praise for your truly super customer service response ,in this day and age its really nice to find such treatment from a large company”
Customer: W Lay
“I have received my Grandad's medals back and would like to thank you for the outstanding job that has been made.”
Customer: C Hardy
“Received package today. We are delighted with the finished product, it has way exceeded our expectations. We will not hesitate to use your services again.”
Customer: S Scott
“I just received my order. Not only did it arrive in time, the product is beautiful and beyond my expectations.”
Customer: R Magee
“Thank you very very much for the great fantastic work you did on the Medal Sets you sent to me. They are a great tribute to my fathers memory and service.”
Customer: D Hancock
01952 510 053
Speak to our expert customer service team Mon-Fri 9am to 5pm.