A commemorative medal, originally proposed and sponsored by the Royal British Legion, available to those who performed National Service, both military and civilian, between January 1930 and December 1960. Next of kin or direct decendants may also apply.

SKU
NSFM
£54.50
Type
Skip to the end of the images gallery 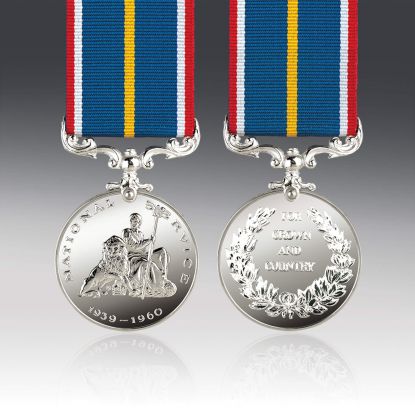 On a highly polished background, features the seated figure of Britannia representing the mother country, supported by a lion which represents all those who served National Service, with the inscription NATIONAL SERVICE 1939-1960.

A full and lush laurel wreath laden with berries – a traditional tribute to those who have excelled – encloses the inscription FOR CROWN AND COUNTRY, to mark the contribution made by all who completed National Service. The medal is fitted with a scroll suspension.

The ribbon has a central gold stripe bound on either side by broad bands of blue, representing the involvement of the Royal British Legion. These blue bands are in turn bound by narrow white and red stripes to give a very rich and patriotic medal ribbon. This medal is supplied on a concealed single pin, ready to wear.

History
In 1939 Parliament introduced the National Service Act, calling on the men and women of the UK to prepare for National Service, either within an arm of the regular services or as a civilian in one of the many voluntary groups being formed and trained at that time. With typical British pride the nation rallied to this call and the ranks of both the armed forces and home defence elements swelled until those who fought for peace were backed by over sixteen million men and women registered for non-military National Service. After WWII others were called to National Service and served with pride to carry the flag to the farthest corners of the globe. By December 1960 when the National Service Act was abolished some five million three hundred thousand young people had been conscripted into the forces.
Eligibility
The National Service Medal is available to those who performed National Service, both military and civilian, between January 1939 and December 1960. Next of kin or direct descendants may also apply. The medal is fitted with a uniquely woven ribbon, completed with a concealed individual brooch bar, ready to wear with pride, not alongside campaign medals, gallantry decorations or in uniform by serving members but separately and distinctively.
Related Items
Check items to add to the cart or
Testimonials
Customer feedback
“Once again I can’t but give you the highest of praise for your truly super customer service response ,in this day and age its really nice to find such treatment from a large company”
Customer: W Lay
“I have received my Grandad's medals back and would like to thank you for the outstanding job that has been made.”
Customer: C Hardy
“Received package today. We are delighted with the finished product, it has way exceeded our expectations. We will not hesitate to use your services again.”
Customer: S Scott
“I just received my order. Not only did it arrive in time, the product is beautiful and beyond my expectations.”
Customer: R Magee
“Thank you very very much for the great fantastic work you did on the Medal Sets you sent to me. They are a great tribute to my fathers memory and service.”
Customer: D Hancock
01952 510 053
Speak to our expert customer service team Mon-Fri 9am to 5pm.