A miniature of the commemorative Arabian Service medal, instituted by the Aden Veterans Association, to commemorate British involvement in South Arabia from 1839 until the withdrawal of British forces in 1967.

SKU
ARMM
£17.50
Type
Skip to the end of the images gallery 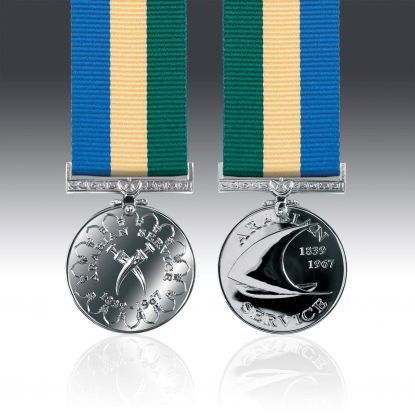 On a highly polished background the obverse features stylised crossed Arabian Jambiyas which are surrounded by the words Arabian Service 1839–1967 and arches representing traditional Arabian architecture.

On a highly polished background the reverse features an Arabian Dhow with its lateen-sail, universally recognisable as a symbol of the Aden colony and the centre piece of the Aden Veterans Association badge, surrounded by the words Arabian Service 1839-1967.

The ribbon has three equal stripes: blue; representing the sea and sky, yellow; representing sand and green; for the Aden Protectorate Levies and the Federal Regular Army. Green is also the colour which appears in most Arabian National flags. The distinctive woven ribbon is fitted to a uniquely designed suspender, which is connected to the medal by the crescent and star. This medal is supplied on a concealed single pin, ready to wear.