The Merchant Navy Service Commemorative Medal has been struck to recognise all former and presently serving merchant service personnel whose dedicated and often dangerous service, contributed to the world economy as it is known today.

SKU
MNFM
£54.50
Type
Skip to the end of the images gallery 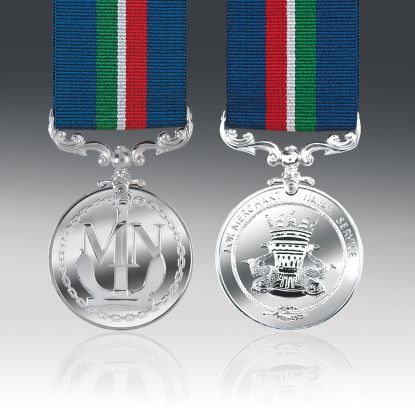 The nautical symbol of a stockless anchor, a piece of equipment familiar to all seafarers, is encompassed by its heavy cable on a highly polished background. In the centre of the design is the cipher comprising ‘MN’, denoting the exclusive nature of this important commemorative medal.

A capstan is supported by two grotesque sea creatures and surmounted by a stylised crown on a highly polished background. A rope encircles the elements and is joined with a reef knot at is lowest point. Between the rope and the outer rim of the medal is the inscription: FOR MERCHANT NAVAL SERVICE.

The ribbon features a solid, dark blue background with central stripes of green, white and red; representing the navigation lights of an approaching ship, resulting in a truly nautical medal ribbon. This medal is supplied on a concealed single pin, ready to wear.

History
The cargoes so vital to many nations through times of war and peace have crisscrossed the vast oceans and coastal waterways that have now become household names. Ships once carried trade goods on voyages of unknown duration to destinations that could only be dreamt of; the experiences of their crews have long since been recorded in history. Life in confined quarters far from home and family seems destined to be the lot of the merchant seaman, many thousands of whom have lost their lives in the wake of these ancient mariners. With the progress of time, vessels have become more and more sophisticated and the cargoes often more hazardous. The exploits of these ships and their crews are mostly taken for granted and seldom recorded, except in dire circumstances or time of war.
Eligibility
The Merchant Navy Service Medal is available to all former and presently serving merchant service personnel in this long standing profession. Although there is a minimum two-year service requirement, the merit of each application will be considered on an individual basis. Applications from DEMS Gunners will be eligible for this commemorative medal. Next of kin and direct descendants can also apply. The medal is fitted with a uniquely woven ribbon, completed with a concealed individual brooch bar, ready to wear with pride, not alongside campaign medals, gallantry decorations or in uniform by serving members but separately and distinctively.
Testimonials
Customer feedback
“Once again I can’t but give you the highest of praise for your truly super customer service response ,in this day and age its really nice to find such treatment from a large company”
Customer: W Lay
“I have received my Grandad's medals back and would like to thank you for the outstanding job that has been made.”
Customer: C Hardy
“Received package today. We are delighted with the finished product, it has way exceeded our expectations. We will not hesitate to use your services again.”
Customer: S Scott
“I just received my order. Not only did it arrive in time, the product is beautiful and beyond my expectations.”
Customer: R Magee
“Thank you very very much for the great fantastic work you did on the Medal Sets you sent to me. They are a great tribute to my fathers memory and service.”
Customer: D Hancock
01952 510 053
Speak to our expert customer service team Mon-Fri 9am to 5pm.