The Malta George Cross Commemorative Medal was commissioned by the Government of Malta as an official replica of the 50th Anniversary medal which had a limited application date of between 15 April 1992 and 15 April 1994. It is available to those who missed the application deadline and served between the dates of 10th June 1940 and 8th September 1943.

SKU
MCFM
£54.50
Type
Skip to the end of the images gallery 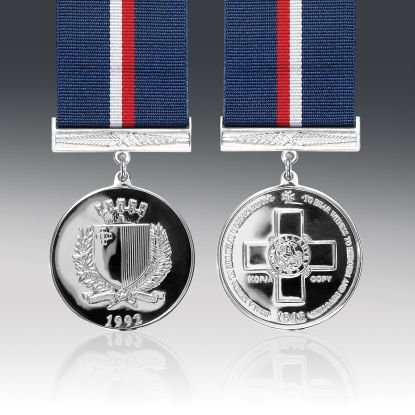 The obverse features the emblem of Malta and the year 1992 on a highly polished background.

The reverse features the British George Cross in the centre, encircled by the words: Bhala xhieda ta’eroizmu u dedikazzioni; To bear witness to heroism and devotion. The wording is separated by a Maltese Cross with the date 1942. The words ‘kopja’ and ‘copy’ appear below the horizontal arms of the George Cross.

The 32mm width ribbon is blue with two narrow, central vertical 3mm stripes in white and red. This medal is supplied on a concealed single pin, ready to wear.

In April of 1942, King George VI conferred the George Cross medal on the tiny Mediterranean island of Malta in a dramatic and unprecedented gesture. As it transpired April was the final month of the great Luftwaffe offensive and possibly the most difficult period of the siege so devastatingly enforced by the Axis powers. The island and its population had been subjected to a constant and unrelenting bombardment since June 1940 and were not to experience any relief from these conditions until the final months of 1942 when supplies and aid began to reach the defenders in significant quantities.

All over the world the people of the United Nations had followed the resistance of the islanders and those trying to bring aid by sea and air. The news of the award of the George Cross was internationally welcomed as it served in a tangible way to mark the heroism of all concerned.

The Government of Malta dignified the fiftieth anniversary of the presentation of the George Cross to the island in 1942 by striking the Malta George Cross Fiftieth Anniversary Commemorative Medal. By this gesture the government of Malta shared the honour bestowed upon the island fortress with all of those who defended and supplied it between 10 June 1940 and 8 September 1943. The period for application to receive the 50th Anniversary Medal was limited from the effective date of 15 April 1992 and 15 April 1994. Every effort was made via press releases worldwide to bring the medal announcement to the attention of veterans. Despite numerous reference in the news media, many of those eligible missed the opportunity to apply for the government awarded medal. With this in mind, the Government of Malta decided to produce an official replica of the 50th Anniversary medal, stuck by AWARD, medallists for the original issue.

Permission for British citizens to wear this medal awarded by the Government of Malta was subsequently granted by Her Majesty the Queen.

Eligibility
All uniformed members of the Allied Armed Forces and Mercantile Marine who, at any time during the qualifying period, served in Malta or in air and sea operations in the Mediterranean connected with the defence, relief or supply of Malta or in operations mounted from Malta against the Axis Forces. All civilians who at any time during the qualifying period were in Malta in one of the following categories: Malta Police Force personnel and Special Constables, Malta Dockyard Police and Malta Dockyard personnel who served with the Dockyard Defence Battery, Nursing members of the Voluntary Aid Detachment, the Red Cross and St John Ambulance, who served in naval, military and civilian hospitals; Malta Civil Defence personnel (Air Raid Precautions); Malta Auxiliary Corps; Malta Volunteer Defence Force or Home Guard; Fire Brigade; District Commissioners, Regional Protection Officers and Protection Officers; Civilians engaged in military duties. Next of kin and direct descendants can also apply. The medal is fitted with a uniquely woven ribbon, completed with a concealed individual brooch bar, ready to wear with pride, not alongside campaign medals, gallantry decorations or in uniform by serving members but separately and distinctively.
Testimonials
Customer feedback
“Once again I can’t but give you the highest of praise for your truly super customer service response ,in this day and age its really nice to find such treatment from a large company”
Customer: W Lay
“I have received my Grandad's medals back and would like to thank you for the outstanding job that has been made.”
Customer: C Hardy
“Received package today. We are delighted with the finished product, it has way exceeded our expectations. We will not hesitate to use your services again.”
Customer: S Scott
“I just received my order. Not only did it arrive in time, the product is beautiful and beyond my expectations.”
Customer: R Magee
“Thank you very very much for the great fantastic work you did on the Medal Sets you sent to me. They are a great tribute to my fathers memory and service.”
Customer: D Hancock
01952 510 053
Speak to our expert customer service team Mon-Fri 9am to 5pm.