"Of all the branches of men in the forces, there are none which shows more devotion and faces grimmer perils, than the submariner." Winston Churchill 1943.

SKU
SUFM
£54.50
Type
Skip to the end of the images gallery 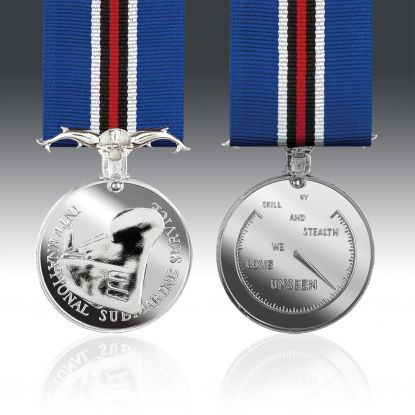 The medal features a submerged ‘Oberon’ glass boat. A class introduced approximately midway through the century of submarine development. The vessel is shown motionless and is encircled by the words: INTERNATIONAL SUBMARINE SERVICE.

The facet incorporates the gradated markings of the depth gauge, on instrument associated with the Submarine Service. Through this feature the viewer can observe the approach of the wording: BY SKILL AND STEALTH WE COME UNSEEN.

The blue represents the depth of the ocean; the white is the wake of the torpedo. The black represents the submarine and the red is the strike power and also reflects the nuclear age. Furthermore, it is the colour of the International Submariners Association. The ribbon is moiréd, giving it a watered effect. The ribbon and medal are connected by a unique medal suspender which incorporates the dolphins of the Submarine Service supporting a propeller in an anti-fouling shroud as found on a torpedo. These elements are linked and attached to the medal by way of a torpedo safety fork. This medal is supplied on a concealed single pin, ready to wear.

Only a select few are accepted for duty in the submarine service and for them the price of success can be very high. To mark such dedication and hardship this special commemorative medal has been struck. The professionalism that is the hallmark of the submariner is acknowledged around the globe, as are the sacrifices they are at times called upon to make. Recognised by their individual countries often with their highest distinction for bravery but never before has a single medal bonded the men of the "Silent Service" of so many nations.

The International Submarine Service Medal is available to all former or presently serving submariners from all nations, their next of kin or direct descendants.