The striking of the Hors de Combat Commemorative Medal is a befitting way to recognise and pay tribute to the outstanding bravery of British servicemen and women who sustained wounds or injury in the line of duty.

SKU
HCFM
£54.50
Type
Skip to the end of the images gallery 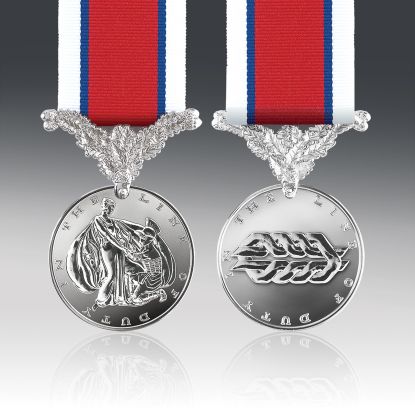 A gladiator, renowned for fighting to the death, is shown on a highly polished background in submissive pose as he gives thanks for his survival before an ethereal female figure accepting the gesture. The poignant image is encircled by the words: IN THE LINE OF DUTY.

The dominant element of the reverse is a stylised rendering of the surgeon’s knot, as old as the branch of medicine so long associated with the wounded and injured, encircled by the words: IN THE LINE OF DUTY.

The ribbon comprises a broad central band of rich red bound on either side by narrow bands of blue, representing the arteries and veins of the body. These elements are in turn bound on the outer edges by bands of clinical white, representing the sterile conditions necessary for recovery. The ribbon is attached to the medal by a suspender, comprising oak leaves; symbol of strength and bravery. A poppy on the ribbon distinguishes medals issued posthumously. This medal is supplied on a concealed single pin, ready to wear.

The Hors de Combat Commemorative Medal is also available posthumously to next of kin of those who paid the ultimate sacrifice. This medal, which will be distinguished by an exclusively designed poppy on the ribbon for posthumous recognition, can be cherished and kept as a fitting tribute to the loss of a loved one who sacrificed their life for their country.

In more peaceful times, the acknowledged bravery of our servicemen and women during war and peacekeeping actions, is often forgotten. The Hors de Combat pays tribute as a lasting reminder of the sacrifices made in the line of duty.

The Hors de Combat Medal is available to all uniformed personnel of First and Second World Wars and all former or presently serving uniformed servicemen and women. It is available to those in the uniformed service sector such as police and fire service, etc, whom sustained wounds or injury in the line of duty. Next of kin or direct descendants can also apply. It is also available posthumously to next of kin of those people who lost their lives serving their country. A poppy on the ribbon will distinguish this medal.