The Hong Kong Service Commemorative Medal marks the service of British civil and military personnel, throughout a long and often turbulent history of the Colony. Civil Servants were required to oversee the administration and legal aspects of the area and a sustained presence of armed forces ensured the monitoring of the thousands of miles of coastline and the 22 miles of contiguous land border with China.

SKU
HKFM
£54.50
Type
Skip to the end of the images gallery 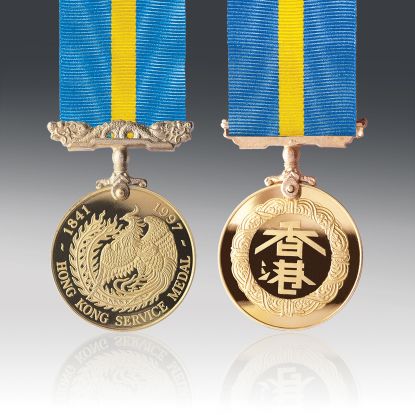 The obverse of the medal features a symbolic Bird of Paradise, delicately modelled with all its fine detail frosted on a mirror polished background. Surrounding the design are the words: Hong Kong Service Medal with the dates 1841 – 1997, denoting the period Hong Kong was 'The Crown Colony of Hong Kong'.

The reverse of the medal has a brilliant polished background and carries the central feature of Hong Kong written in Cantonese. The golden appearance of the medal giving prestige and a most appropriate commemorative significance to service in the ' Fragrant Harbour'.

The blue of the Ribbon represents the waters, channels and the seas surrounding Hong Kong and the New Territories with the centre Golden Yellow stripe representing the rich and strategic 'Jewel in the Crown'. The exclusively designed woven medal ribbon is fitted to a uniquely designed medal suspender, which features two powerful inter-twined dragons 'guarding the Colony'. This medal is supplied on a concealed single pin, ready to wear.

The Hong Kong Medal embraces a period of historical importance to this once far-flung segment of the British Empire. Due to the strategic geographic location enjoyed by the islands of Hong Kong, it has long been of prime importance in the area known for so long as the Far East. Annexed in 1841 by Captain Charles Elliot, RN, it grew to be the world's third largest port and an economic force to be reckoned with by the time British involvement ceased in June 1997. Between the island of Hong Kong and the vast country of China an area of the mainland totalling about 350 square miles was leased to the United Kingdom in 1898 for a 99-year period under the Convention of Peking. This area known at the time of the agreement as 'The Emperor's Rice Bowl', now became known as the New Territories and this land along with the island of Hong Kong and its surrounding 235 islands would be known as The Crown Colony of Hong Kong.

Throughout this long and often turbulent history the Colony required the constant input of civil servants to oversee the administration and legal aspects of the area. In addition to this ongoing integration of British personnel a sustained presence of armed forces ensured the monitoring of the thousands of miles of coastline and the 22 miles of contiguous land border with China. It is to mark such service both civil and military that the Hong Kong Service Medal was introduced.

The Hong Kong Service Medal is available to all former civil and military personnel who served for a minimum period of six months in The Crown Colony of Hong Kong, Eligibility is also extended to include next of kin and direct descendants.