Thousands of veterans, civilians and family members will attend events and commemorations to remember personnel involved in operation Corporate and the sacrifices they made in the Spring of 1982 throughout April until Liberation Day on Tuesday 14th June. To mark the 40th anniversary of the Liberation of the Falkland Islands, AWARD, in support of SSAFA, the Armed Forces charity, has commissioned a special Falklands edition of the For Crown & Country lapel badge.

Hand polished & Enamelled by hand
The attractive Crown and Country badge is an alchemy of design, imagination and aesthetics and has a high level of skill and expertise throughout the production process. The attention to detail and finish has resulted in a personalised jewel which can be worn with pride.

This exclusive issue proudly shows the patriotic elements of the regal Crown, the Union Jack and a subtle and faithful composition and reduction of the arms of the Falklands. The attractive and hand polished enamelled Falklands Crown & Country badge can be diamond engraved with your service number, years of service or name. allowing 16 characters including spaces, is fitted with a non-turn, superior nickel clutch stud and is presented in a handsome presentation case which makes a perfect gift.

£1.50 from the sale of each badge will be donated to SSAFA, the Armed Forces charity. 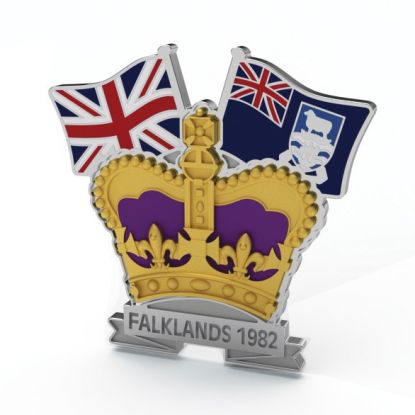 Add to Wish List
Testimonials
Customer feedback
“Once again I can’t but give you the highest of praise for your truly super customer service response ,in this day and age its really nice to find such treatment from a large company”
Customer: W Lay
“I have received my Grandad's medals back and would like to thank you for the outstanding job that has been made.”
Customer: C Hardy
“Received package today. We are delighted with the finished product, it has way exceeded our expectations. We will not hesitate to use your services again.”
Customer: S Scott
“I just received my order. Not only did it arrive in time, the product is beautiful and beyond my expectations.”
Customer: R Magee
“Thank you very very much for the great fantastic work you did on the Medal Sets you sent to me. They are a great tribute to my fathers memory and service.”
Customer: D Hancock
01952 510 053
Speak to our expert customer service team Mon-Fri 9am to 5pm.