The British Military Service Commemorative Medal proudly displays affinity to your Regiment or Service. The nickel and gold plated medals are available with 19 British Regimental and Service emblems. In addition you can request any regimental, ships, squadron or station badge, which can be diamond engraved onto the highly polished, nickel-silver obverse of the medal and will be fitted and the appropriate coloured, woven ribbon.

SKU
RMFM
£58.00
Type
Skip to the end of the images gallery 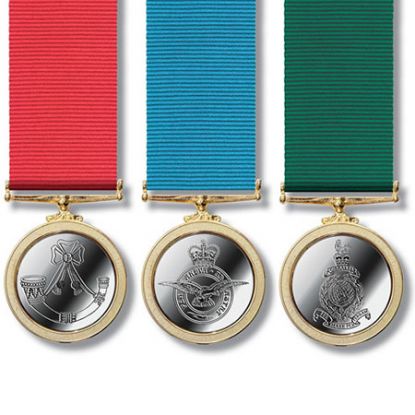 The obverse of each medal bears the regimental or service badge of your choice, minted on a 28mm (1.1”) nickel-silver plated and highly polished medallion which is set in a 36mm, 24 carat gold-plated medal.

The reverse of the polished medal features a full and lush laurel wreath laden with berries – a traditional tribute to those who have excelled encasing the words ‘For Crown and Country’.

History
A medal commemorating all those who served or are currently serving in any of the 19 regiments or services: Royal Navy (RN), Army "crossed swords" (ARMY), Royal Air Force (RAF), Royal Marines (RM), Royal Artillery (RA), Royal Army Service Corps (RASC), Royal Engineers (RE), Royal Electrical and Mechanical Engineers (REME), Royal Signals (RCS), Army Catering Corps (ACC), Light Infantry (LI), Parachute Regiment (PARA), Royal Army Medical Corps (RAMC), Royal Army Ordnance Corps (RAOC), Royal Army Pay Corps (RAPC), Royal Corps of Transport (RCT), Royal Military Police (RMP), Royal Tank Regiment (RTR) & RAF Regiment (RAFR).
Eligibility
All British & Commonwealth Forces who served or are currently serving in any of the 19 Regiments and Services for any period to present day. Next of kin or direct descendants may also apply. The medal is fitted with a uniquely woven ribbon, completed with a concealed individual brooch bar, ready to wear with pride, not alongside campaign medals, gallantry decorations or in uniform by serving members but separately and distinctively.
Testimonials
Customer feedback
“Once again I can’t but give you the highest of praise for your truly super customer service response ,in this day and age its really nice to find such treatment from a large company”
Customer: W Lay
“I have received my Grandad's medals back and would like to thank you for the outstanding job that has been made.”
Customer: C Hardy
“Received package today. We are delighted with the finished product, it has way exceeded our expectations. We will not hesitate to use your services again.”
Customer: S Scott
“I just received my order. Not only did it arrive in time, the product is beautiful and beyond my expectations.”
Customer: R Magee
“Thank you very very much for the great fantastic work you did on the Medal Sets you sent to me. They are a great tribute to my fathers memory and service.”
Customer: D Hancock
01952 510 053
Speak to our expert customer service team Mon-Fri 9am to 5pm.