A miniature of the Commemorative Queen’s Platinum Jubilee Medal, struck in 2022 to commemorate the 70th anniversary of the reign of Queen Elizabeth II.

This is a Pre Issue offer. The Official issue date is the 6th February 2022

Applications accepted from 16th October 2021. Please note payment for your preorder will be taken on acceptance of your application

SKU
QPMM
£17.50
Type
Skip to the end of the images gallery 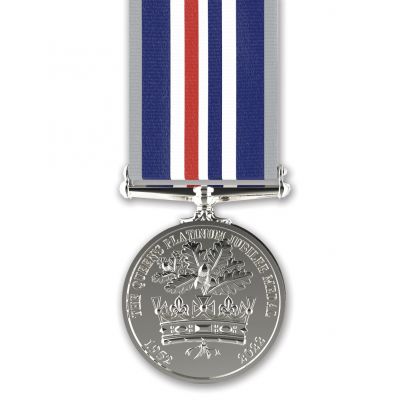 The obverse of the medal is highly polished with its fine majestic design. The leaves and acorn of the oak tree, a symbol of the strength of the Monarchy behind a regal crown symbolising the fortitude, wisdom and endurance, celebrating Her Majesty's reign. Surrounding the design is the wording THE QUEEN’S PLATINUM JUBILEE MEDAL and the years 1952-2022. On the reverse a royal crown sits proudly at the top of the medal with the wording ELIZABETH II PLATINUM JUBILEE and 1952-70-2022

The centre stripes running down the centre of the medal ribbon reflect the patriotic red, white and blue of the Country's flag between royal blue and platinum stripes representing the Platinum Jubilee

History
AWARD, in association with SSAFA, the Armed Forces charity, is proud to announce the striking of the Commemorative Queen’s Platinum Jubilee Medal to commemorate the 70th anniversary of Her Majesty the Queen’s reign, the first time this has been achieved by a British Monarch.
Eligibility
AWARD miniature medals complement the full-size commemorative medals and are available without restriction.
Related Items
Check items to add to the cart or
Testimonials
Customer feedback
“Once again I can’t but give you the highest of praise for your truly super customer service response ,in this day and age its really nice to find such treatment from a large company”
Customer: W Lay
“I have received my Grandad's medals back and would like to thank you for the outstanding job that has been made.”
Customer: C Hardy
“Received package today. We are delighted with the finished product, it has way exceeded our expectations. We will not hesitate to use your services again.”
Customer: S Scott
“I just received my order. Not only did it arrive in time, the product is beautiful and beyond my expectations.”
Customer: R Magee
“Thank you very very much for the great fantastic work you did on the Medal Sets you sent to me. They are a great tribute to my fathers memory and service.”
Customer: D Hancock
01952 510 053
Speak to our expert customer service team Mon-Fri 9am to 5pm.