A miniature of the Cold War Medal marking service with British & Allied Forces during The Cold War 1945 – 1991.

SKU
CWMM
£17.50
Type
Skip to the end of the images gallery 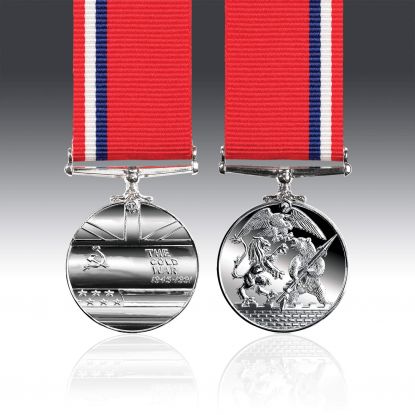 The obverse of the medal comprises the flags of the three main players in the Cold War; the Soviet Union being contained by the United States and the UK showing the dates 1945-1991.

The reverse features the Russian Bear clutching a missile which is symbolic of the USSR stand-off, confronted by the Lion representing the forces of the United Kingdom and its allies. The Eagle of the United States completes the combined opposition to the Soviet Union at the time of the Cold War.

The ribbon has a configuration similar to that commonly used on Soviet medal ribbons with the red white and blue on the left edge representing the allies and the bright red of the Soviet flag on the right. This medal is supplied on a concealed single pin, ready to wear.