The Cold War Medal marks service with British & Allied Forces during The Cold War 1945 – 1991, their next of kin or direct descendants.

SKU
CWFM
£54.50
Type
Skip to the end of the images gallery 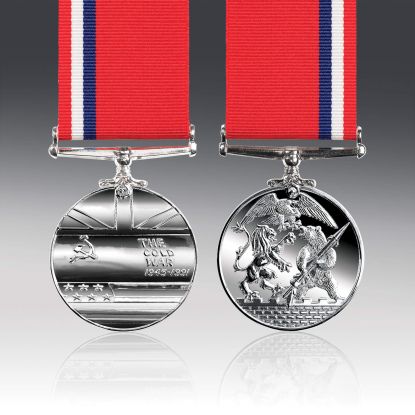 The obverse of the medal comprises the flags of the three main players in the Cold War; the Soviet Union being contained by the United States and the UK showing the dates 1945-1991.

The reverse features the Russian Bear clutching a missile which is symbolic of the USSR stand-off, confronted by the Lion representing the forces of the United Kingdom and its allies. The Eagle of the United States completes the combined opposition to the Soviet Union at the time of the Cold War.

The ribbon has a configuration similar to that commonly used on Soviet medal ribbons with the red white and blue on the left edge representing the allies and the bright red of the Soviet flag on the right. This medal is supplied on a concealed single pin, ready to wear.

History
The Cold War was the period of confrontation and tension between the United States and the Soviet Union and their respective allies from 1945 to 1991. 'From Stettin in the Baltic to Trieste in the Adriatic an iron curtain has descended across the continent', quoted Winston Churchill. Britain's most expensive and turbulent period of military history was about to begin. 1990 saw the demolition of the Berlin Wall; a symbolic and significant sign that the Cold War was coming to an end and on 3 October 1990, East and West Germany were united as one country. The following year the Soviet Union, led by Mikhail Gorbachev, consolidated control over it states – the Iron Curtain was lifted and the Cold War came to an end.
Eligibility

The commemorative Cold War Medal is available to those who served during the Cold War 1945-1991, their next of kin or direct descendants.