A a miniature of the commemorative medal which pays tribute and honours all those who served or are serving in the Cadet Forces.

SKU
CFMM
£17.50
Type
Skip to the end of the images gallery 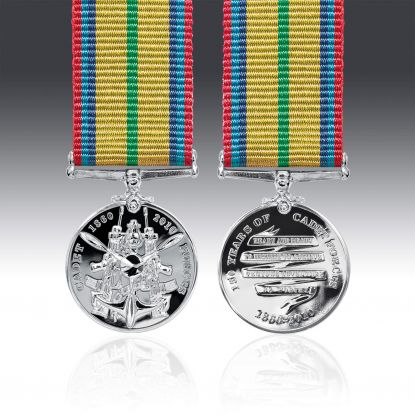 The obverse of the medal depicts a fouled anchor, the L98-A1 Cadet GP Rifle and a three blade propeller symbolising the Sea, Army and Air Cadet Forces with the year dates 1860-2010 marking the 150th anniversary since the first Cadet Corps formed in 1860.

On the reverse the mottoes of the Sea Cadet Corps - ‘READY AYE READY’, the Army Cadet Force – ‘TO INSPIRE TO ACHIEVE’, the Air Training Corps - ‘VENTURE ADVENTURE’ and the Royal Marines Volunteer Cadet Corps – ‘BE WORTHY’ are proudly encapsulated in a scroll surrounded by the words 150 YEARS OF CADET FORCES with year dates 1860-2010.

The ribbon comprises the red, dark blue and light blue colours of the 1939-45 star representing the Army, Air Force and Navy bounded by equal bands of sunshine yellow representing 'youth' with a central green stripe for 'growth'. This medal is supplied on a concealed single pin, ready to wear.