A commemorative medal which pays tribute and honours all those who served or are serving in the Cadet Forces.

SKU
CFFM
£54.50
Type
Skip to the end of the images gallery 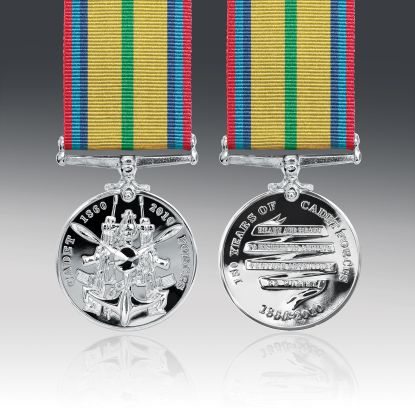 The obverse of the medal depicts a fouled anchor, the L98-A1 Cadet GP Rifle and a three blade propeller symbolising the Sea, Army and Air Cadet Forces with the year dates 1860-2010 marking the 150th anniversary since the first Cadet Corps formed in 1860.

On the reverse the mottoes of the Sea Cadet Corps - ‘READY AYE READY’, the Army Cadet Force – ‘TO INSPIRE TO ACHIEVE’, the Air Training Corps - ‘VENTURE ADVENTURE’ and the Royal Marines Volunteer Cadet Corps – ‘BE WORTHY’ are proudly encapsulated in a scroll surrounded by the words 150 YEARS OF CADET FORCES with year dates 1860-2010.

The ribbon comprises the red, dark blue and light blue colours of the 1939-45 star representing the Army, Air Force and Navy bounded by equal bands of sunshine yellow representing 'youth' with a central green stripe for 'growth'. This medal is supplied on a concealed single pin, ready to wear.

The first Cadet Corps was formed at Rossall School in 1860. It was raised as an army contingent to help the country’s defence numbers following heavy losses in the Crimean War and with the purpose of protecting Britain in the event of an attack from overseas.

Many ex-cadets went on to fight with distinction in the two World Wars and from 1939 provided invaluable and essential support to the Home Guard and the war effort. Today’s four Cadet Forces, supported and sponsored by the Ministry of Defence are voluntary youth organisations, using the ethos of the Armed Forces to provide young people with the opportunity to develop and test themselves for their role in the community with many cadets becoming the next generation of the Armed Forces.

The full-size medal is available to those who served or are presently serving in the Cadet Forces, their next of kin or direct descendants.  In addition, eligibility includes the Adult Volunteers and Civilian Instructors on which the Cadet Forces depend. Former members of the Woman’s Junior Air Corps (WJAC later Girls Venture Corps – GVC, no Girls Venture Corps Air Cadets GVCAC), Girls training Corps (later GVC now GVCAC) and Girls Nautical Training Corps (now SCC) are also eligible to apply.