The Bomber Command Medal pays tribute to all air and ground crew veterans whose contribution to Bomber Command was so very essential during World War II.

SKU
BCFM
£54.50
Type
Skip to the end of the images gallery 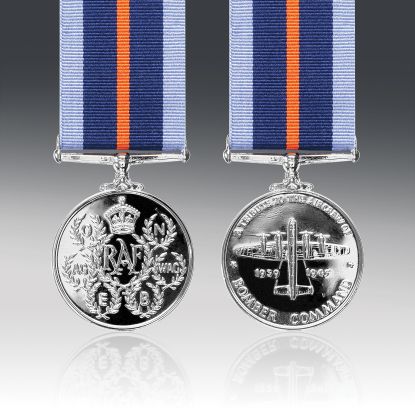 A Tudor crown surmounting a laurel wreath containing the letters RAF is flanked by smaller wreaths containing the brevet letters of the aircrew; signifying courage, team spirit and leadership.

A Lancaster bomber flanked by the dates 1939 and 1945 with inscription: A TRIBUTE TO THE AIRCREW OF BOMBER COMMAND, around the circumference.

The ribbon colours of blue grey, midnight blue and flame represent the North Sea, the night sky over enemy territory, the flame of the target and the return trip.

Since the striking of the first RAF Bomber Command Medal by Lady Harris and the late Air Vice Marshal D.C.T. Bennett CB, DSO, FRAeS, in April 1985, thousands of Bomber Command WW2 veterans from all over the world have applied for and received their medal.

We were delighted to announce at the time of the launch that the driving force behind the concept of a commemorative medal for members of Bomber Command was the RAF columnist and author, Alan Cooper, who has long supported the view that veterans of this branch of the service have received inadequate medallic reward for their courage and skill during WWII.

The medal is a tribute to the bravery of those who flew and to the dedication and skill of the ground crew whose contribution was so very essential.

The Bomber Command Medal is available exclusively to all who served in Bomber Command during the Second World War, their next of kin or direct descendants.