AWARD, in association with SSAFA - the Armed Forces charity, is proud to announce the striking of theCommemorative World War II Victory & Peace Medal. 2020 marks the 75th anniversary of victory and final settlement of peace in Europe, the Far East and Pacific war zones after much sacrifice and loss of life over a total six-year period of war.

To be worn with pride by all those heroes who served, their next of kin or direct descendants.

The obverse of the medal, with all its fine detail frosted on a mirror polished background, has the dove of peace rising in flight from the letter ‘V’ for victory and the date 2020, carrying in its beak a palm branch which is the symbol of victory and peace. Surrounding the design is the wording 75th ANNIVERSARY OF THE DECLARATION OF PEACE. 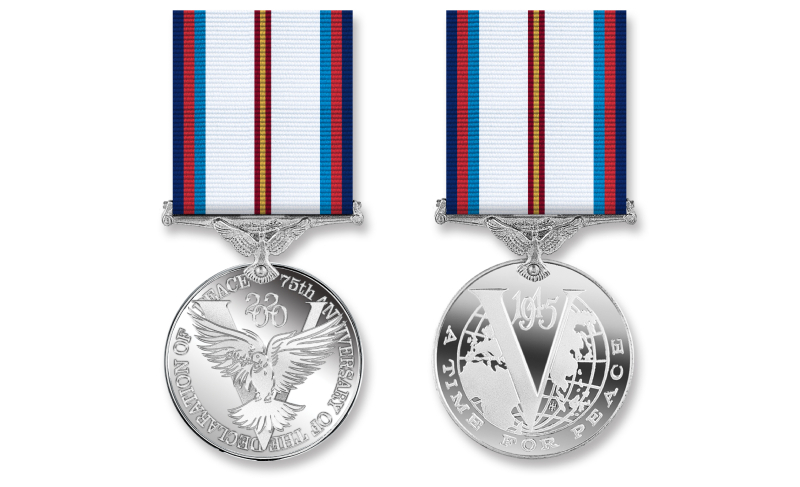 The medal reverse features the iconic design of the Restoration of Peace Medal issued to mark the 50th Anniversary and has the world globe as its centre. The globe depicts the African, European and Pacific landmasses with the letter ‘V’ for victory and the date 1945. The words A TIME FOR PEACE surround the side.

The outer bands of red and blue represent the services, Merchant Navy and the involvement of SSAFA whilst the two diamond white bands reflect the 75th anniversary of victory and peace. The theme of the Restoration of Peace Medal is continued with the two centre bands of rich claret representing life separated by a band of gold for the dawn of a new day.

The ribbon is fitted to the same suspender with its unusual feature of the dove of peace rising in flight and carrying in its beak a palm branch. The medal is supplied on a concealed single pin, ready to wear with pride, not alongside campaign medals or gallantry decorations, but separately and distinctively.

In Association With SSAFA

AWARD is a proud supporter of Veteran Groups & Charities since 1986 and has donated over £1 million to date. We will be donating 10% from the net sale (£3.96 of each full-size and £1.33 of each miniature) of the Commemorative Victory & Peace Medal in support of SSAFA, the Armed Forces Charity. Registered as a charity in England and Wales, Number 210760 in Scotland Number SCO38056 and in Republic of Ireland Number 20006082.

Please note that payment for pre-orders will be taken on acceptance of the application.