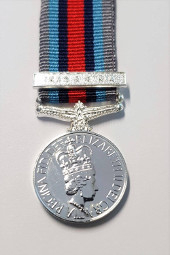 In September 2017, the Defence Secretary at the time, Michael Fallon, announced an Iraq and Syria Operational Service Medal, also known as the Op SHADER Medal. It recognises the vital contribution of UK military personnel as part of the coalition fight against Daesh. The miniature medal is now available from AWARD and is fitted with an Iraq & Syria Clasp and supplied with loose ribbon. The full-size replica medal is not yet available.