The 60th Anniversary and Reunion Battle for Malta medal was commissioned by Battle for Malta International Veterans Committee, on behalf of the people of Malta, as a tribute to those who defended and supplied the island during the Second World War.

SKU
BMFM
£54.50
Type
Skip to the end of the images gallery 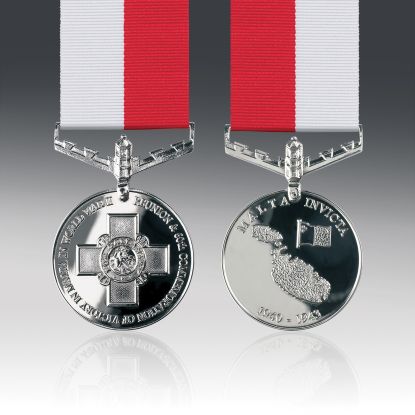 The George Cross is encompassed by the wording - Reunion & 60th Commemoration of Victory in Malta in World War II - linking the veterans of the Battle for Malta with the final victorious outcome of the Second World War.

A highly polished background features an image of the Island and its national flag surrounded by the words ‘Malta Invicta’, and the years 1940-1943.

The woven ribbon comprises the white and red colours of the national flag of Malta GC, fitted to a uniquely designed suspender which is based on the lookout turrets and castellated walls of the ancient city of Valetta.

The specially designed 36mm Battle for Malta full-size medal was presented to veterans who returned to the island for their reunion and 60th anniversary commemorations in September 2005 and is now available to those who could not make the return.

The medal is a befitting way to pay tribute to the men and women from all over the world who defended Malta from the Axis powers and who have often been described by military historians as brave, courageous and unflinching in their dedicated resistance to the bombardment of this beautiful Mediterranean island.

The full-size Battle for Malta Medal is only available to those who defended and supplied Malta between 10 June 1940 and 8 September 1943. Next of kin and direct descendants can also apply.