The Arctic Service Medal, proposed by the Russian Convoy Club in conjunction with the North Russia Club the Commemorative Arctic Campaign Medal, is a tribute to the three armed services and the Merchant Navy whose vessels were the object of the enemy's attention and formed the life line to Russia.

SKU
ACFM
£54.50
Type
Skip to the end of the images gallery 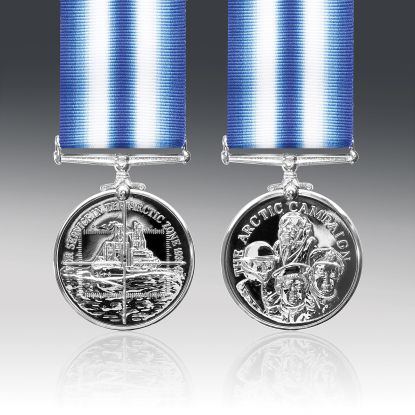 On a highly polished background the obverse features only one aspect of the danger faced by many in the hostile environment of the Arctic. It shows a liberty ship forming part of the ‘life line’ convoys which ferried vital cargoes to Russia and the United Kingdom across the Arctic Zone, framed in the cross-hair of the U-boat periscope. The design is surmounted by the wording: ‘For Service in the Arctic Zone 1939-45’.

The reverse portrays a cross section of some of the services involved in this most difficult campaign. The four figures are easily distinguishable as: the merchant seaman whose vessels were the object of Hitler’s marauding wolf packs and long range bombers; the Royal Navy seaman who was committed to ensuring the safety of the convoys and their precious cargoes; the Army is represented by a muffled figure, essential to the existence in the extreme temperatures of the remote land bases they were called upon to defend as well as duty on merchant ships as DEMS gun crews; the airman whose log flying hours afforded the vital air protection required for the safety and success of many convoys.

The 32mm wide ribbon, in water weave equal bands of blue and white, represents the ice and sea which were as much an enemy as any predator. This medal is supplied on a concealed single pin, ready to wear.

History
Not only a tenacious and cunning enemy faced the allies who served in the Arctic Zone but bitter cold, long winters ate into the very souls of men and wreaked havoc with machinery. Proposed by the Russian Convoy Cub in conjunction with the North Russia Club, we consider it a special privilege to have been commissioned to strike the retrospective medal commemorating those who served in the Arctic Campaign, 1939-1945. The medal is intended as a tribute to the three armed services and the Merchant Navy whose vessels were the object of the enemy’s attention and formed the lifeline to Russia.
Eligibility
Available exclusively to all allied veterans of the Arctic Campaign in the Second World War, their next of kin or direct descendants. The medal is fitted with a uniquely woven ribbon, completed with a concealed individual brooch bar, ready to wear with pride, not alongside campaign medals, gallantry decorations or in uniform by serving members but separately and distinctively.
Testimonials
Customer feedback
“Once again I can’t but give you the highest of praise for your truly super customer service response ,in this day and age its really nice to find such treatment from a large company”
Customer: W Lay
“I have received my Grandad's medals back and would like to thank you for the outstanding job that has been made.”
Customer: C Hardy
“Received package today. We are delighted with the finished product, it has way exceeded our expectations. We will not hesitate to use your services again.”
Customer: S Scott
“I just received my order. Not only did it arrive in time, the product is beautiful and beyond my expectations.”
Customer: R Magee
“Thank you very very much for the great fantastic work you did on the Medal Sets you sent to me. They are a great tribute to my fathers memory and service.”
Customer: D Hancock
01952 510 053
Speak to our expert customer service team Mon-Fri 9am to 5pm.