A commemorative medal paying tribute to all of the Special and Elite forces of the United Kingdom and those of their allies around the world.

SKU
SFFM
£54.50
Type
Skip to the end of the images gallery 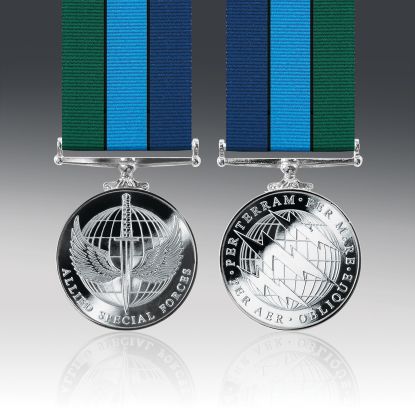 The medal features a mirror polished background with a dagger and wings representing all Elite and Special Forces. These elements surmount a globe of the world indicative of the international parameter of the medal. The words ‘ALLIED SPECIAL FORCES’ surround the globe.

The highly polished reverse also features a globe with lightning bolts demonstrating the speed, force and secrecy with which Special Forces strike. The following words surmount the globe: PER TERRAM (by land), PER MARE (by sea), PER AER (by air) and OBLIQUE (covertly).

The green, sky blue and sea blue stripes represent involvement by land, air and sea with two narrow black stripes through the centre of the ribbon to represent the covert nature of Special Force operations. This medal is supplied on a concealed single pin, ready to wear.

History
During the last century, Allied Special Forces have performed operations with unparalleled skill, secrecy and bravery. From daring raids deep into Nazi-occupied Europe to the dangerous manoeuvres into enemy territory during the Gulf War and more recently the wars in Iraq and Afghanistan. Special Forces around the globe adopt unconventional warfare techniques giving them the capability to provide a viable military option for a variety of operational tasks that are inappropriate or infeasible for conventional forces. Understandably, most operations are to this day shrouded in secrecy with only limited information released to remain within the bounds of many of the Regiments disclosure policies and to ensure that past, present and future operations and international relationships are maintained.
Eligibility
Available to any member of an elite or special force of Britain or that of anyone whose country was an ally of Britain at the time of their service, irrespective of whether the United Kingdom was itself involved in any conflict or operation during their service. The next of kin of such personnel as described above will also be eligible. Due to the very nature of Special or Elite Force operations, we understand that many will be unable to provide detailed service information and as such we ask that only as much information as possible is provided; and fields requesting information considered to be secret or highly confidential should be left blank. All applications will be treated with the strictest confidence by our Medals Office and details will not be disclosed to any third parties, under any circumstances. The medal is fitted with a uniquely woven ribbon, completed with a concealed individual brooch bar, ready to wear with pride, not alongside campaign medals, gallantry decorations or in uniform by serving members but separately and distinctively.
Testimonials
Customer feedback
“Once again I can’t but give you the highest of praise for your truly super customer service response ,in this day and age its really nice to find such treatment from a large company”
Customer: W Lay
“I have received my Grandad's medals back and would like to thank you for the outstanding job that has been made.”
Customer: C Hardy
“Received package today. We are delighted with the finished product, it has way exceeded our expectations. We will not hesitate to use your services again.”
Customer: S Scott
“I just received my order. Not only did it arrive in time, the product is beautiful and beyond my expectations.”
Customer: R Magee
“Thank you very very much for the great fantastic work you did on the Medal Sets you sent to me. They are a great tribute to my fathers memory and service.”
Customer: D Hancock
01952 510 053
Speak to our expert customer service team Mon-Fri 9am to 5pm.