SKU
PWFM
£54.50
Type
Skip to the end of the images gallery 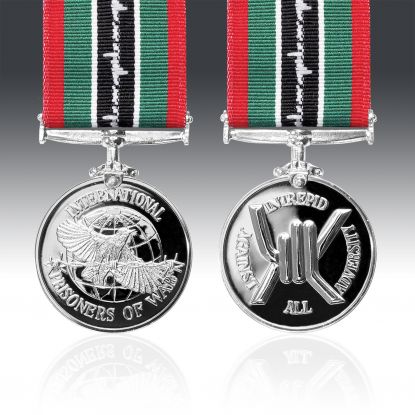 The prominent feature of the front and obverse side of the medal is the strand of barbed wire which has entrapped a young bird, symbolic of freedom itself. These elements surmount a globe of the world indicative of the international parameters of the medal. The wording ‘International Prisoners of War’ encircles the entire design.

The haunting and vicious barb of the ever-present wire is used symbolically to divide the reverse side of the medal into four elements, each bearing one of the words in the phrase: ‘Intrepid against all adversity.’

The ribbon has a symbolised strand of barbed wire bounded on either side by black bands representing the despair of the compound. These in turn are edged by white bands representative of the second and third fences of the compound. The bands of green are reminiscent of the fields of home and finally both red edges are symbolic of the burning faith of those who were interned. This medal is supplied on a concealed single pin, ready to wear.

Award was commissioned to strike a long awaited retrospective commemorative medal for Ex-Prisoners of War or their next of kin. The medal has been sensitively designed to honour the sacrifice of freedom suffered by so many allied combatants.

The Ex-Prisoner of War Medal indicates that the veteran was deprived of freedom and should give the observer an indication of the particular hardships endured.

Available to all Ex-Prisoners of War whose countries were allies of Britain at the time of their capture, irrespective of whether the United Kingdom was involved in the conflict or not. Next of kin or direct descendants of such Ex POWs as described above will also be eligible.