The 1939–45 Star was a campaign medal of the British Commonwealth, awarded for service in the Second World War. The medal was awarded for operational service between 3rd September 1939 and 2nd September 1945. To qualify for this medal, members of the Royal Navy had to complete 6 months service in areas of active operations. For the Army, they had to have served 6 months in an operational command. If they were airborne troops, they could qualify by participating in an airborne operation, and had completed 2 months in a fully operational unit.

WWII medals were not engraved when originally issued, so replacements therefore are not suitable for engraving. 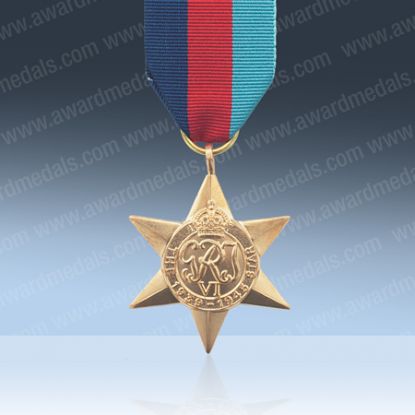 Battle of Britain Clasp
There was one clasp issued for this medal, which is "BATTLE OF BRITAIN" and was awarded to RAF personnel who were engaged in the Battle of Britain between 10 July and 31st October 1940. Britain's war time leader Winston Churchill referred to these men as "The Few, who gave so much". When the medal is not worn, and only the ribbons on the tunic can be seen, the clasp is denoted by a gilt rosette

Medal Design
The medal itself is a 6 pointed star with the Royal Cipher "GRI VI" in the centre, with an inscription of "THE 1939 - 1945 STAR" around the cipher. A crown is mounted above the cipher. The reverse of the medal is blank as with all World War II medals. The ribbon is 1.25" and represents the 3 services (dark blue - Navy, red - Army and light blue - RAF).

Medal Mounting
This medal is supplied with loose ribbon. If you require this medal to be mounted ready to wear please select your required mounting option. Full-size Commemorative & Official Medals CANNOT be group mounted together.