The 1914 Star (AKA as the Mons Star) Replica Campaign miniature medal for service in World War I. Approved in 1917, for issue to officers and men of British forces who served in France or Belgium between 5 August & midnight 22/23 November 1914. 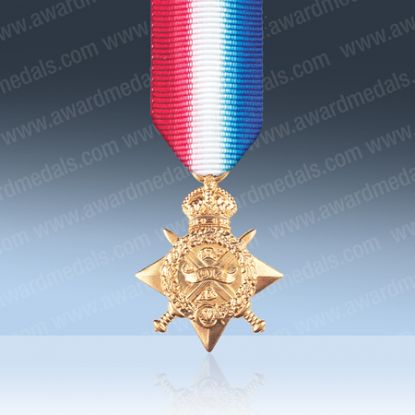 The medal was authorised under Special Army Order 350 in November 1917 and by an Admiralty Fleet Oder in 1918. Often referred to as the Mons Star, it was awarded to British soldiers and Marines for the opening campaign on the Western Front. A small number were issued to sailors but only if they had served on land. The medal was authorised in April 1917.

Miniature Medal Made of Bronze
This medal is made of bronze and measures 1.75" wide by 2.25" top to bottom. The medal is a four pointed star, with the top point being hidden by the Imperial Crown. The obverse has a scroll in the centre and the months "AUG" above and "NOV" below. Surrounding the medal is a laurel wreath with the "GV" monogram at the bottom with two crossed swords (blades uppermost) in the background. The ribbon is attached via a ring on top of the crown. The reverse is plain and flat with the recipients' number, rank, name and unit.

Miniature Medal Ribbon
The ribbon is 1.25" with red, white and blue shaded stripes. In 1919, King George V authorised the issue of a clasp "5TH AUG - 22ND NOV 1914" for any soldier who came under enemy fire or within range of enemy mobile artillery in France or Belgium between the 5th August and 22nd November 1914. This was authorised under Army Order 361. This clasp was to distinguish between front line soldiers and those who worked in the rearward areas.

Medal Clasp
The clasp is sewn directly onto the ribbon. When the ribbon was worn without the medal, those entitled to the clasp wore a silver rosette in the centre of the ribbon. This rosette has caused some confusion amongst recipients of the 1914 Star, who believed that it identified the wearer as having earned the earlier of the two stars and not the clasp. It is not known how many clasps were issued, however it is believed to be as many as five in every seven medals issued. Due to the fact that the clasp had to be claimed personally by the recipient, it explains why there are fewer clasps in circulation than men who should have received them. A great number had either died before 1919 or simply neglected to apply.