The 1914 Star (known as the Mons Star) Replica Campaign medal for service in World War I. Approved in 1917, for issue to officers and men of British forces who served in France or Belgium between 5 August & midnight 22/23 November 1914. 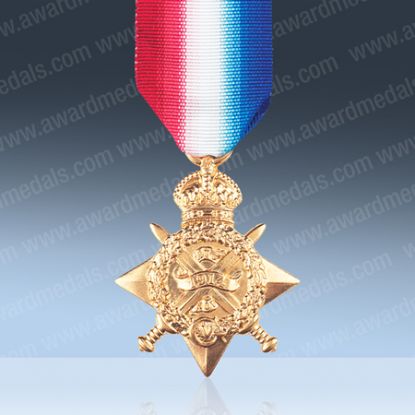 The Mons Star
The medal was authorised under Special Army Order 350 in November 1917 and by an Admiralty Fleet Oder in 1918. Often referred to as the Mons Star, it was awarded to British soldiers and Marines for the opening campaign on the Western Front. A small number were issued to sailors but only if they had served on land. The medal was authorised in April 1917. This medal measures 1.75" wide by 2.25" top to bottom. The medal is a four pointed star, with the top point being hidden by the Imperial Crown. The obverse has a scroll in the centre and the months "AUG" above and "NOV" below. Surrounding the medal is a laurel wreath with the "GV" monogram at the bottom with two crossed swords (blades uppermost) in the background. The ribbon is attached via a ring on top of the crown. The reverse is plain and flat and can be engraved with the recipients’ number, rank, name and unit.

Medal Back Engraving
Your service number, rank, name & initials and regiment or service can be professionally diamond engraved on the back of your medal.

Medal Mounting
This medal is supplied with loose ribbon. If you require this medal to be mounted, please select the mounting option required. Full-size Commemorative & Official Medals CANNOT be group mounted together.

Related Items
Check items to add to the cart or
Testimonials
Customer feedback
“Once again I can’t but give you the highest of praise for your truly super customer service response ,in this day and age its really nice to find such treatment from a large company”
Customer: W Lay
“I have received my Grandad's medals back and would like to thank you for the outstanding job that has been made.”
Customer: C Hardy
“Received package today. We are delighted with the finished product, it has way exceeded our expectations. We will not hesitate to use your services again.”
Customer: S Scott
“I just received my order. Not only did it arrive in time, the product is beautiful and beyond my expectations.”
Customer: R Magee
“Thank you very very much for the great fantastic work you did on the Medal Sets you sent to me. They are a great tribute to my fathers memory and service.”
Customer: D Hancock
01952 510 053
Speak to our expert customer service team Mon-Fri 9am to 5pm.